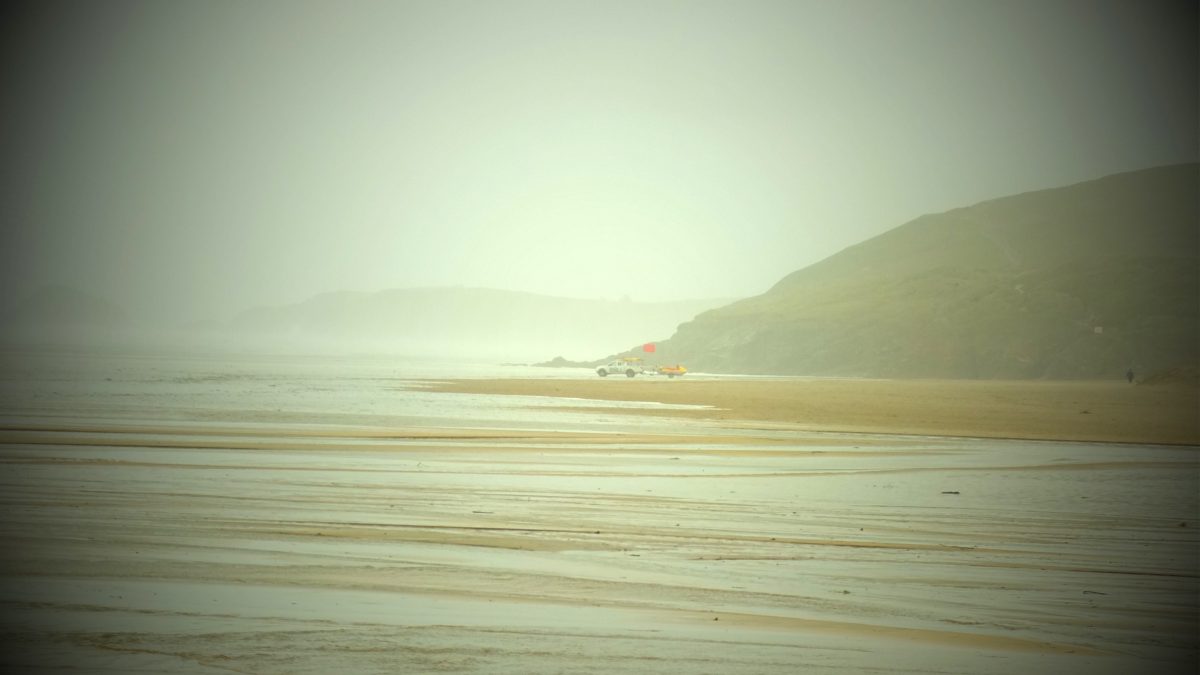 Simon Minchin 3 min read
In the winter, the beach is a painting. A smudged landscape, sea-grey and sky-blue, where charcoal stick figures throw balls for dogs and rubber-black surfers climb foaming peaks.
But in the summer, it’s a postcard. A saucy, salacious snapshot of too much flesh exposed to too much sun. Kiss me quick but hold me tight. Wish you were here, lots of love from Aunty Dott and your cousin, Vi.
And summer has almost arrived now; ordered in May and delivered in June.
In the summer you can stand on the little promenade that’s next to the car park and look out over the beach, all three and a bit miles of it, and be forgiven for thinking that you can’t see a single grain of sand. Fat people, thin people, young people and old are spread across the beach; the flotsam and jetsam of fifty working weeks somewhere up north. Up where the tributaries of the M5 and M6 begin to run down towards the sea.
All of them are here, it seems, on our beach.
At low tide they thin out and trickle down towards the surf line, some even get grabbed by the breakers and bob about in the shallows, but when the tide starts to come back in it pushes them up the beach like spume and they become stuck in drifts around the ice cream stand and the place where Bob’s kids sell cold cokes from rusty oil drums filled with ice.
In the summer, the car parks are always full and even the field behind the Co-Op grows a cash crop of parked up tin. The garage makes more money selling parking space than it does selling petrol and there is even a rumour that the primary school will rent out its car park during the summer holidays. Whatever next?
Coaches leak puddles of pensioners looking for shops that sell sticks of rock and bags of boiled sweets before they head towards the benches that look out over the sea. Van-driving people get semi-naked right there, right where they parked. They step delicately into other, blacker skins before lifting their surfboards high above their heads like totems, fetishes, sacrificial offerings to the sea.
But most people who come, arrive in cars and the cars here on holiday can be recognised by their fullness. They are full of people, full of stuff. They bring people enough to fill a beach. Even one as big as this.
And every one of those thousands of people leave their own mark.
No one steps onto the sand without leaving an impression, without leaving a record of their passage. Writing not their name in the sand – although enough of them do that – but the trail of their journey from start to finish. Perhaps they built a castle. Perhaps they marked out a volleyball court. They used the sand as a canvas and drew a face or they simply looked back at their own footprints and marveled – or not – that the print they left behind was unique to them and no one else.
And twice a day that record is wiped away and all trace of them removed.
Twice a day the tide comes in and drives them back to the dunes, back to the rocks and, at high tide itself, off the beach entirely. Later, when time has passed and the tide has turned the beach emerges from the sea once again and shows no trace of what had been at all.
No mark. No record. Nothing.
xx xx